Did you know that there is one form of legal methamphetamine? You do not usually find the words “meth” and “legal” in the same sentence, unless “is not” is between them.

Did you know drug laws state that you can be imprisoned for a life sentence and fined up to 20 million dollars under the right circumstances for meth trafficking?

Do you know how the federal drug laws define paraphernalia, and how you could get in trouble with it?

Did you know that you can call an addiction specialist today at 623-263-7371 to confront a meth addiction problem for you or someone you know?

Meth is an illegal and highly addictive substance. Learn more about federal and Arizona state laws pertaining to meth down below:

So, what else don’t you know about meth? Let’s start at the top.

Most people have at least heard of meth, but many may not have a clear understanding of its composition or effects.

Methamphetamine, or meth, is a stimulant under Schedule II classification. Schedule II substances are highly addictive and must be monitored closely and administered carefully. Due to the Schedule II status, meth possession charges by state can vary. However, the substance is illegal at the federal level.

It is important to keep the status in mind when you ask, “Are drug laws state or federal?” The laws are both.

Meth use can cause addictive tendencies after one use. Chronic meth users suffer from hallucinations, delusions, dental deterioration, among a long list of other detrimental mental and physical complications.

Meth is, for the most part, an illegal drug one purchases off the street. However, the only FDA approved the use of meth is from the prescription medication called Desoxyn.

Simple drug possessions are misdemeanors. A misdemeanor may cause up to a year in jail or a thousand-dollar fine. Sometimes, both.

However, if you have any prior drug offenses, you may be at risk for a felony charge under a simple possession offense.

Wait, didn’t you say that meth was legal?

Yes, in certain circumstances, but don’t expect to go to your doctor and get a prescription for it.

This medication is available in 5, 10, and 15 mg tablets and is only available for specific cases of Attention Deficit Hyperactivity Disorder (ADHD) and obesity.

Desoxyn will never be a doctor’s first choice in prescribing your medication, and the likelihood of obtaining that prescription is incredibly slim. Additionally, this prescription is non-refillable.

Meth is addicting, and one should not even medicinally use the drug for any measurable length of time. State and federal drug laws require medical professionals to monitor the administration of Desoxyn closely.

Simple drug possessions are misdemeanors. Misdemeanors are up to a year in jail or a thousand dollar fine. Sometimes, both.

However, if you have had a prior drug offense that has already finalized, you could be charged with a felony under a simple possession offense.

Wait, did you say that meth was legal?

Yes, but don’t expect to go to your doctor and get a prescription for it.

Desoxyn will never be a doctor’s first choice for prescribing your medication, and the likelihood of obtaining that prescription is incredibly slim. Additionally, this prescription is non-refillable.

Meth is addicting, and even medicinally should not be used for any measurable length of time. State and federal drug laws require medical professionals to monitor the administration of Desoxyn closely.

Simply put, paraphernalia is the equipment one uses to do drugs.

According to the Drug Enforcement Administration in the U.S. Department of Justice, Title 21 United States Code (USC), Controlled Substances Act drug paraphernalia is:

Anything that is used in the creation, concentration, alteration, cultivation, misrepresentation, preparation, or bodily insertion of any federally controlled substances.

“…It includes items primarily intended or designed for use in ingesting, inhaling, or otherwise introducing marijuana, cocaine, hashish, hashish oil, PCP, methamphetamine, or amphetamines into the human body.”

What are the different pieces of equipment?

The exact descriptions of what pieces of equipment are considered drug paraphernalia, according to the Drug Enforcement Administration in the U.S. Department of Justice, Title 21 United States Code (USC), Controlled Substances Act:

You now understand the basics of what meth is, how the drug is classified, what federal law considers drug equipment and the difference between a misdemeanor and felony charges.

If caught with meth or caught trafficking meth, there are degrees of penalties by offense levels. Additionally, each offense level is determined by how much of the substance was involved.

If you receive a trafficking conviction, anything you own that was obtained via trafficking will be taken away from you.

The first offense against federal trafficking laws is no less than five years of incarceration, but no more than forty years. However, if someone died or became seriously injured in connection with your arrest, you will receive no less than 20 years to life imprisonment.

Dependent on whether or not you are solely responsible will determine the fine that accompanies the sentence. Penalties for the first offense are between 2-5 million dollars.

We don’t know about you, but we don’t have that lying around in our coat pockets.

The second offense against federal trafficking laws is no less than ten years imprisonment, but no more than a life sentence.

Upon the event that someone died or became seriously injured in connection with your arrest, the penalty fines are between 4-10 million dollars. Ouch.

First-time offenders with this much meth will receive no less than ten years in prison and no more than a life sentence. The penalty fines if someone dies or incurs critical injury in connection with your arrest is between 4-10 million dollars. Depending on whether you are the sole perpetrator or with an accomplice your fine will vary.

Strike two is where punishments get worse.

Additionally, those penalty fines skyrocket to range between 8-20 million dollars. Hopefully, these punishments alone are enough to deter meth use and trafficking altogether.

The third offense, and beyond

You will receive a life sentence. After two or more offenses, do not expect a sympathetic judge. Lifetime imprisonment sounds terrible, and we highly recommend staying away from meth altogether.

Meth is a Schedule II Controlled Substance. According to federal law, a conviction of illegal possession of any controlled substance can face up to a year in prison, a minimum fine of $1,000, or both.

Second convictions require a minimum fine of $2.500, and no more than two years imprisonment.

Three strikes and you’re out.

Three convictions or more, you are looking at no more than three years in prison and a hefty $5,000 in penalties.

You may also get hit with civil penalties, which could bring you a bill for up to $10,000, no matter if you face criminal prosecution or not.

Lastly, you could also be paying for the investigation and prosecution process against you.

So for clarification, getting caught with copious amounts of meth will not only imprison you, fine you, or both; but you can also pay fines of up to $10,000 from civil penalties and pay for all the legal ramifications against you.

None of this sounds like a fun way to spend the next 2-60 years, wouldn’t you agree?

Stay away from meth.

According to the Arizona State Legislature 13-3407, “A person shall not knowingly:

In direct accordance with the Arizona State Legislature 13-3407,

In all honesty, this game of cat and mouse is not worth it at all. If you or someone you know is suffering from substance use disorder, reach out to a recovery specialist group as soon as possible.

Addiction is a mental illness caused by substance use disorder, as drugs work by manipulating sensors and receptors to exploit the reward system in the brain.

Selling, distributing, or trafficking meth of any kind is illegal, expensive, unsafe, and not worth it. 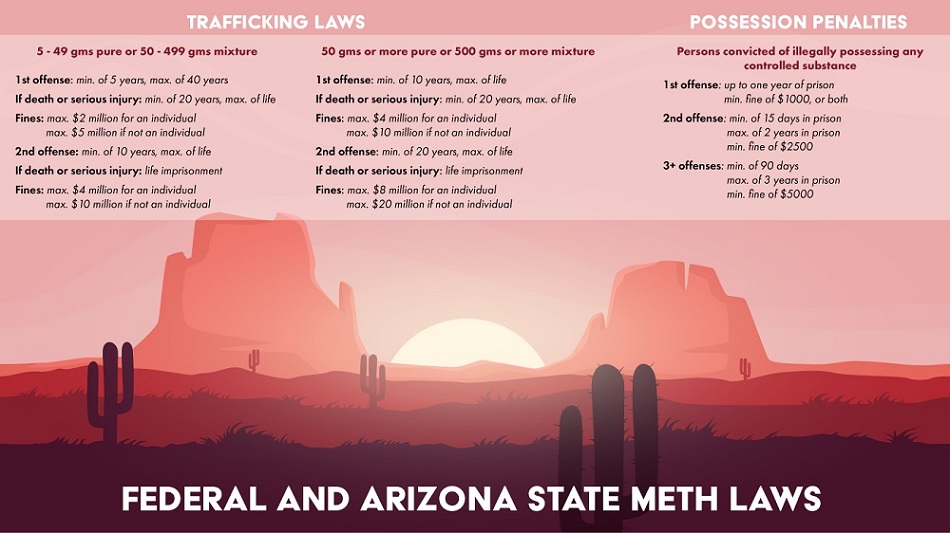 Inside the World of White-Collar Substance Abuse