Is Vaping a Drug Safer Than Smoking it?

Vaping technology is evolving. Many vaping devices, such as Juul pods, now allow for various drugs to be used. A study from King’s College in London says nearly 40% of e-cigarettes and vaping users in their poll vape illegal drugs. In creating a new form of drug use, a new set of health concerns follow. While some of these concerns are no different from those using the same drug in other ways, vaping poses a new set of dangers when taking drugs of any kind and ultimately serves as a foundation for addiction.

Quitting any addiction is never easy, and the path to sobriety often requires assistance. If you are unsure how to start your journey to sober living, give us a call at 623-263-7371. With the help of an addiction specialist, you can discuss treatment options and find the right care for you. We can help you overcome it.

Do you need more information? Continue reading below for more tools to help you, or anyone you know, that may be struggling with vaping.

No matter which device one chooses, the mechanism remains the same in each. A liquid cartridge – typically containing nicotine, a flavoring, and other chemicals – turns into a vapor. This vapor, which can taste like anything from menthol cigarettes to bubble gum, is inhaled by the user. Then the molecules from the vapor are absorbed by the lungs into the bloodstream, where it gets carried to the brain. The use of vapor is where the term “vaping” comes from. As a bonus, the name helps to disassociate vaping from smoking. In doing so, it distances itself from the health risks associated with smoking, but this impression is misleading.

The Effects of Vaping

Vaping has not been around long enough for us to truly understand any long-term health effects. However, there are reports from health experts citing serious – sometimes deadly – lung damage in those who do vape. Moreover, vaping devices allow nicotine to enter the body. Nicotine itself is highly addictive and can cause a number of health concerns.

In children and teenagers, Nicotine can cause the following:

In adults, the use of nicotine increases the risk of addiction to other substances.

All in all, in the debate of vaping vs smoking, there is no winner. Vaping is not any healthier by opting for vapor over smoke. Oftentimes, the vapor in these devices is not made from water. It is instead a more complex liquid from a lengthy list of chemicals – none of which are good for a person to inhale.

Vaping drugs allows a substance to quickly permeate the body. In truth, the process is shockingly efficient. The transformation of liquid to vapor is controlled by heated coils, and the liquid is engineered with certain dosage levels. This makes vaping more effective than smoking. When smoking, one burns a substance, like tobacco, along with its wrapper to inhale the resulting smoke. By burning its wrapper along with it and by having no control over the rate, or heat of the burn, smoking as a process is less controlled and less effective. One study found that vaping leads teenagers to move on from vaping nicotine to more powerful substances.

But despite the efficiency of vaping, it does not make ingesting such substances any less risky or addictive. In fact, it can make drug-taking even more hazardous and addictive. So, is vaping better than smoking? Clearly the answer is no.

How Does it Work?

As with nicotine, an illegal drug must be in a liquid state to be consumed by vaping. Because of this, most drugs in their commonly available forms are not ready for use in different types of vaping devices. Most of them require lab work to turn them into a suitable liquid. Nonetheless, liquid versions of drugs like cocaine, morphine, and ecstasy can be on dark web marketplaces.

Yet, as a study from Virginia Commonwealth University has found, these liquids do not always contain what they advertise. Due to this, one could order a rare flavor of a nicotine cartridge and end up with something much stronger. Possibilities like this grow even more likely and life-threatening as time goes on. Experts are currently predicting that drug cartels will also make heroin for vaping available soon.

The Risks of Vaping Drugs

Changes in the Brain:

Aside from the risks in buying illegal liquid cartridges, the actual vaping of illicit drugs can entail serious consequences for users. The material gets in the lungs through vaping can reach the brain in around five seconds. This quick delivery from a vaping device to the brain “increases the brain’s association between action and reward, increasing the addiction potential.” Unlike drinking, where a certain level of digestion must occur before the intended effects are felt, vaping allows near-instant gratification. Without a buffer in ingestion, the time between action and reward is shorter, and the mind becomes a victim. The pathways in the brain which understand reward changes. Thus, addictive behavior becomes more likely.

Lack of Detection and Intervention:

With help, addiction can be overcome. Help from someone you trust especially can make all the difference. However, such help can only come with the knowledge of what is happening. With vaping devices, there is an added level of discretion in drug-taking. Unlike smoking, where there are a visible cue and a smell, vapor can disappear more quickly and avoids lasting odors. This creates a problem for detection and prevention, not only from law enforcement but from family and friends. With less fear of being caught, vaping allows individuals to use illicit drugs more often without a likelihood of intervention, making an already addictive process even more dangerous.

Additionally, with the quick highs come quick lows. Since there is no ongoing process of absorption, the effects of drugs through vaping can disappear more quickly. Because of this, users of vaping devices may find themselves overusing to create sustained highs. Inevitably, overusing one’s vaping device also leads to addiction and dependence. More importantly, overusing any drug or drug-ingesting device can sadly lead to the potential for an overdose. Thankfully, help is out there!

The Benefits of Quitting

As challenging as it can be, quitting vaping is achievable and beneficial. In doing so, one can avoid the following risks:

The Truth About Vaping

Is vaping better than smoking? Is vaping worse than smoking? The currently available evidence suggests that vaping is NOT better or any safer than smoking. Its addictive potential and health risks to its users make vaping possibly even worse than smoking, especially when illicit drugs are involved. As unhealthy as vaping is with nicotine, the dangers of vaping increase tenfold when it’s used as a delivery system for illicit drugs. The truth about vaping is that can it change the mind by rewiring the brain’s reward pathways. This done, rational consideration of action and reward becomes blurred. Overuse and addiction are likely. And when vaping illegal drugs, the possibility of an overdose is dangerously high.

Thankfully, despite being a relatively new technology, vaping can be defeated with assistance. Quitting and overcoming addiction is always possible. All it takes to beat vaping or even drug addiction is to take the first step and speak with an addiction specialist today. Simply call the number below. Our addiction specialists can guide you to the treatment and service you need. You can overcome. 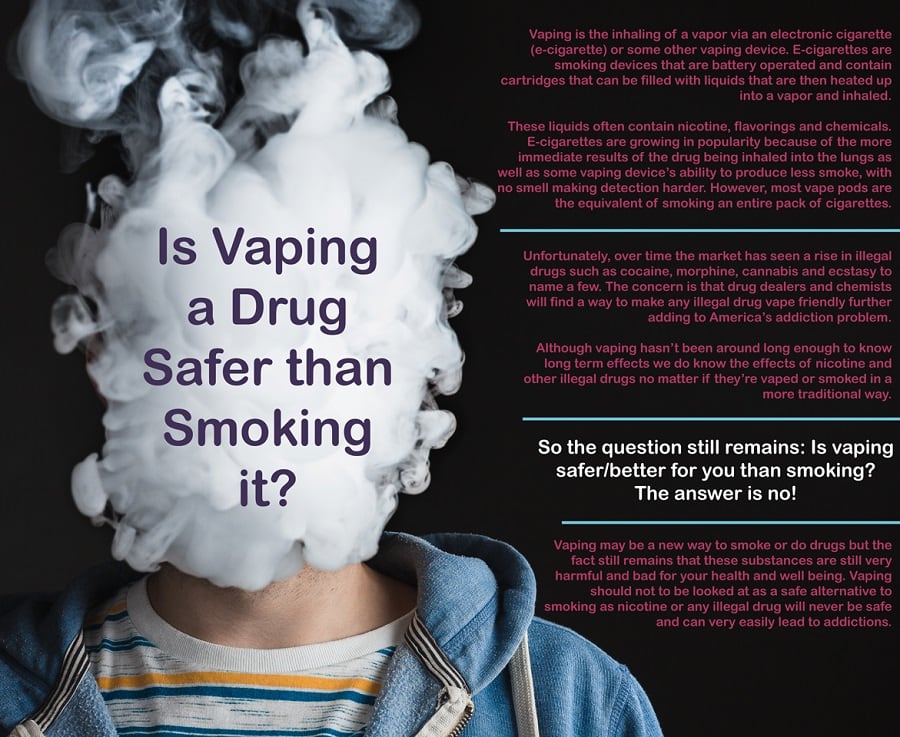